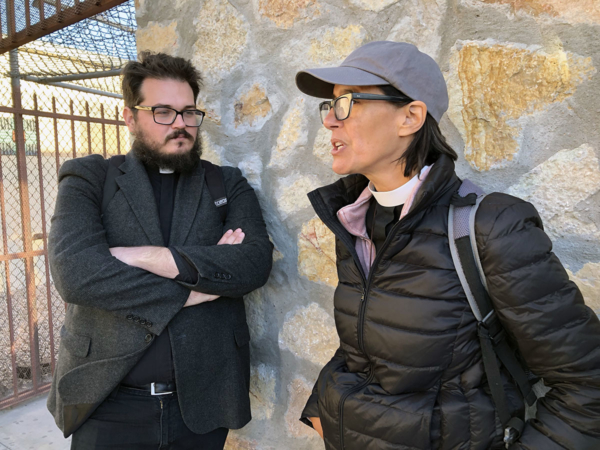 The Rev. Cristina Rathbone, who while on sabbatical is serving asylum-seekers as a bridge chaplain in El Paso, and the Rev. Lee Curtis, canon to the ordinary in the Diocese of Rio Grande, strategize about how they’ll address U.S. Customs and Border Control as they accompany two families of four on the Santa Fe Street Bridge in their attempt to ask for asylum. Photo: Lynette Wilson/Episcopal News Service

In recent months Mexican families fleeing rising violence perpetrated by drug cartels in the country’s south have arrived at the U.S. southern border seeking protection in the United States via the asylum system. Though, unlike Central American asylum-seekers, who have been arriving steadily at the U.S.-Mexico border for more than a year, there’s no “official” system for handling the surge in Mexicans seeking the same protection from violence and persecution.

“The people who are living out on the streets by the ports, they are all Mexican; there is no established system to deal with Mexican asylum-seekers seeking the protection of the United States,” said the Rev. Cristina Rathbone, who for three months while on sabbatical has served the Diocese of Rio Grande in El Paso as a bridge chaplain, accompanying families as they wait their turn to claim asylum and holding daily English and art classes for children.

“By the three ports of entry there are three tent communities, and the people there, more than two-thirds of them have families, have self-organized,” she said. “They have created unofficial community-based lists; the people at the top of those lists go up to the ports of entry and seek permission to ask for asylum from the border patrol agents every two hours, 24 hours a day, and almost always are turned away with the same refrain, ‘there is no room.’” 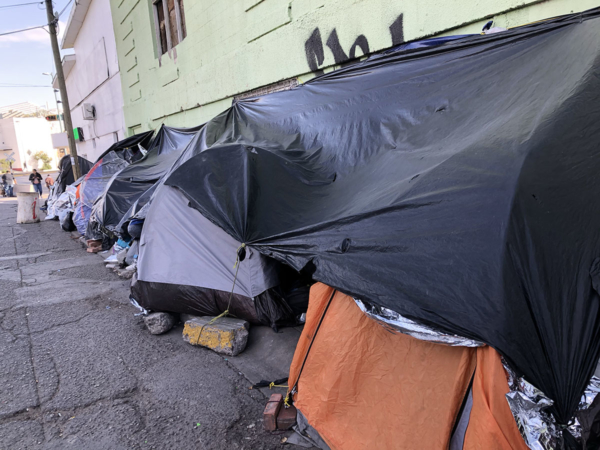 Tent cities have taken stake at the foot of the three bridges on the Juárez side of the U.S.-Mexico border where Mexican nationals – two-thirds of them families – are waiting to claim asylum in the United States. Photo: Lynette Wilson/Episcopal News Service

Earlier in the year, the Trump administration implemented Migrant Protection Protocols, a policy commonly referred to as “Remain in Mexico” that requires asylum-seekers to wait in shelters in Mexico while their credible fear claims are processed. The policy and others like those brokered with individual countries, El Salvador for example, were designed to deter asylum seekers.

The protocols, however, do not apply to Mexican asylum-seekers who have congregated in tents; President Trump has characterized immigrants and migrants as “murders” and “rapists.” And, though, cartels have exploited the chaos at the border to their advantage, some migrants are fleeing cartel violence in their communities.

During a homily delivered at the second annual Border Ministries Summit held in Arizona, Rathbone shared some of the stories she’s heard while serving at the border.

“Hundreds,” she said, “a grandfather shot in the stomach and then slashed by a machete and left for dead after seeing a murder he shouldn’t have seen. A father who was sent photographs of his murdered son’s lifeless and tortured body by his son’s own murderers. And, just yesterday, a mother sobbing on the sidewalk, showing me photos of her husband in an open coffin – murdered in her own home a week ago…

“All of these people, who are also Jesus himself, and many thousands more – including the most vulnerable among us: pregnant women, unaccompanied minors and members of the LGBTQ community – are being denied their right – supposedly upheld by both U.S and international law – to apply for asylum in this country. And all are waiting at our ports of entry, nonetheless, because still they believe in the hope that is – or used to be – the United States of America. 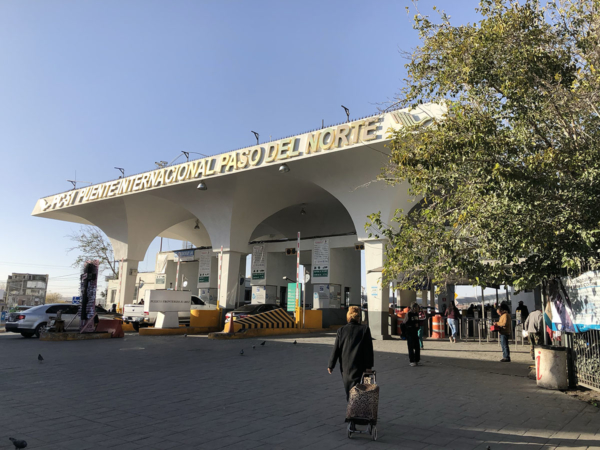 Episcopalians are providing humanitarian aid to migrants and asylum-seekers and, where possible, support to law enforcement officers in their parishes and communities, all along the 1,954-mile U.S.-Mexico border. The Diocese of Rio Grande, which includes the entire state of New Mexico and far West Texas, stretching from El Paso down through the Big Bend regions, includes 40 percent of the southern border and has been working on both sides.

In Juárez, the diocese has provided assistance to the Rev. Hector Trejo who serves as vicar of three Anglican churches in the Diocese of Northern Mexico.

“When the buses were coming through, we in the Diocese of the Rio Grande, were caring for the people that were coming off the buses and helping them get resettled. When the U.S. government started the remain in Mexico policy, instead of those buses coming into the Diocese of the Rio Grande, people were just put on the buses and driven across into Juárez and left on the street in Juárez,” said Rio Grande Bishop Michael Hunn. “But we felt that those are folks who are trying to come to the United States, and we think that that is our responsibility to try to help and care for them.”

For some in the United States it may seem the most recent wave of migration has ceased, but that’s not the case; it’s just less visible, Hunn said.

“It’s not true that the migration has stopped,” said Hunn, whose office is based in Albuquerque, New Mexico. “It’s just that the people are on the other side of the border now. And, so we were able to work with and leverage our existing relationship with Padre Hector Trejo … He opened up immediately one of his churches to serve as a shelter.”

Trejo has now opened the doors to two of his three churches to serve as shelters, with assistance from Rio Grande and the wider support of its borderlands ministry.

In August, when the Rev. Lee Curtis became Rio Grande’s canon to the ordinary based in El Paso, shelters were the urgent need.

“We were serving mostly Cuba nationals; this was just as the remain in Mexico policy took effect,” he said. “So, the task was pretty clear: build up shelter, support the Cubans as they’re waiting in Mexico for their ‘credible fear’ interview. Then when they get their ‘credible fear’ interview, they’re released by CBP [Customs and Border Protection] back to the U.S. and we’ve done our job.”

One of the other major challenges, though, is that almost as soon as faith-based and other humanitarian workers get a handle on the situation, it changes.

“The second we feel like we have figured out the shape of migration in Juarez it changes, whether through U.S. policy or where folks are coming from,” said Curtis.

“In late September, early October, we were down to about 15 Cuban asylum-seekers, and then the Mexicans started coming from southern states and they’ve started sleeping around the bridges. … It’s a guess as to when CBP will be letting people over. So, they have been staying by the bridges because they don’t want to miss an opportunity to cross.”

Some of the families have been living in tents in Juárez for two months; as the weather gets colder some are sleeping in shelters, returning to the bridges in the morning to take their places in line. And for some, the long wait can result in being sent back to the very communities they’ve fled, as Rathbone pointed out in her homily when she told the story of a woman with five children who’d fled after the cartel tried to kill her oldest son. They were denied asylum. The likely outcome if they return home, the mother told Rathbone, is that her sons will be forced to choose between joining the cartel or death.

“It’s important to remember that these Mexican asylum-seekers are the people in the small pueblos and the big towns and the enormous cities who are saying no to the violence and the drug cartels of Mexico. These are the people whose lives are being threatened and many of them ended because they are refusing to join the criminal enterprises,” said Rathbone.

–Lynette Wilson is a reporter and managing editor of Episcopal News Service. She can be reached at lwilson@episcopalchurch.org.