Community Thanksgiving at St. Paul’s in West Texas draws crowd, for some a homecoming 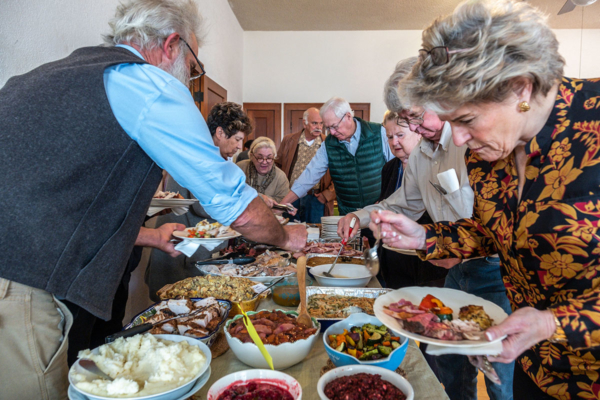 Once it was agreed to, Scott’s mother, Dorothy, suggested inviting widows from the community who might not otherwise have a place to go, and from there, Thanksgiving dinner grew and a St. Paul’s tradition emerged.

This year, on Nov. 28, more than 200 people – parishioners, locals, tourists, part-time residents and others – filed through the serving line at St. Paul’s in Marfa, a small West Texas town of 1,800 people. They dined together at tables in the parish hall and outside on pews moved to the lawn to handle the overflow.

For Chelsea Rios, a native of Marfa who grew up across the street from the church, the annual Thanksgiving dinner at St. Paul’s is a chance to reconnect to people in the community. It’s also something Rios, who’s a park ranger at the Fort Davis National Historic Site 22 miles north via Highway 17, promotes to out-of-towners looking for a place to share a meal. Such was the case with Houstonian Renee Harris, her husband and their three children, who met Rios the previous day while hiking in the Davis Mountains.

“We were going to wing it,” said Harris, as she waited for her family to gather in the parish hall.

The Harris family worships at a Roman Catholic church at home in Houston but joined with more than 80 others in St. Paul’s sanctuary for the 11 a.m. Eucharist that preceded dinner. 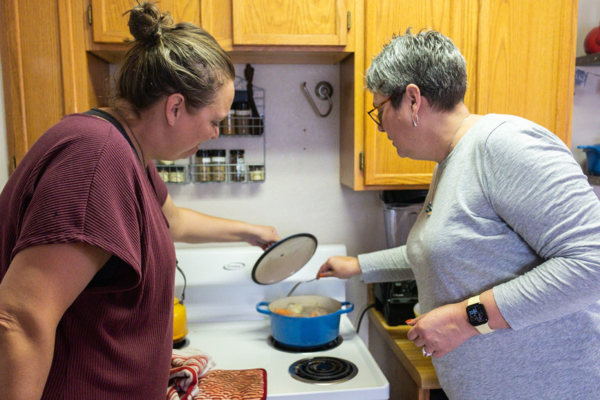 Gretel Enck, left, and her sister, Melody Crenshaw, prepare one of the dishes at Enck’s home for the Thanksgiving feast at St. Paul’s Episcopal Church. Photo: Sarah M. Vasquez for Episcopal News Service

As worshippers filled the pews, volunteers, including Gretel Enck who the day before cooked one of the dinner’s five turkeys, put on their aprons and took their places in the kitchen. By the end of the church service, these parishioners and community members were delivering a steady flow of ham, brisket, side dishes and desserts.

Dedie Taylor, one of the dinner’s lead organizers, and Enck worked in the kitchen, while Enck’s mother, Mary Drachler, played the organ. Drachler was visiting from Bainbridge, New York, where she’s a member of St. Peter’s Episcopal Church.

“I just think the whole thing is so special, and it gets me out of cooking,” said Drachler, who for the fourth time attended St. Paul’s Thanksgiving dinner, along with another daughter and a son-in-law who were also in town visiting Enck. 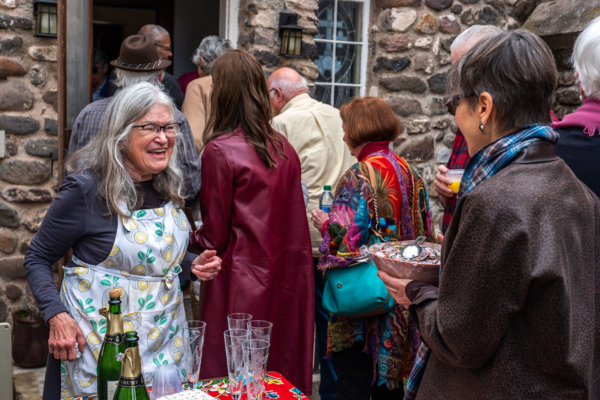 Coordinating and sharing big dinners is something Taylor has been doing for a long time. Orphaned at 16, Taylor decided early on that she’d make her own Thanksgivings, Christmases and Easters. In fact, it was while prepping for a Thanksgiving dinner she was hosting for 30 people in her 984-square-foot apartment in Washington, D.C., that she first met her future husband, Lonn Taylor, who died earlier this year.

“I lived on the top floor and he lived on the fourth floor, and I was going down to 7-Eleven to get something last minute, cream or something, and he got on the elevator,” said Taylor.

She suspected he was new to the building and asked him if he had dinner plans, which he did, so she invited him to come by for dessert since her dinner was starting later than his.

He showed up for dessert, and after that, they shared dinner together “at least once a week for 18 months,” before dating formally and eventually marrying. They moved to Fort Davis, Texas, in 2002 and began attending St. Paul’s and volunteering on Thanksgiving.

In 2009, Lonn Taylor wrote a parish history dating back to the 1930s. In some early records, the town’s Methodists were referred to as the “Shouting Methodists” because of their enthusiasm for worship, the Baptists as the “Dunking Baptists” for their total-immersion baptisms, and the Episcopalians as, fittingly, the “Eating Episcopalians” because they hosted frequent “church suppers” and invited the community to dine for the cost of a dime. 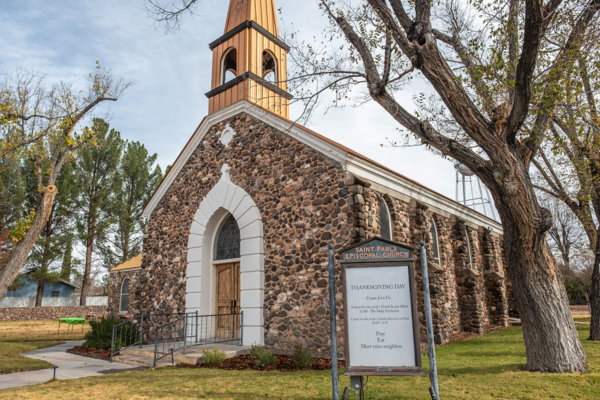 The sign in front of the St. Paul’s Episcopal Church invites everyone to the annual Thanksgiving feast. Photo: Sarah M. Vasquez for Episcopal News Service

Located on a high plateau in the Chihuahuan Desert 60 miles north of the U.S.-Mexico border, Marfa is a 200-mile drive from the nearest airport – El Paso or Midland – and 26 miles from the nearest hospital. In the early 1970s, artist Donald Judd began buying property in downtown Marfa and ranchland on the periphery. Judd later established the Chinati Foundation, a contemporary art museum named for the Chinati Mountain Range, putting Marfa on the map and earning it worldwide recognition in art circles and beyond. 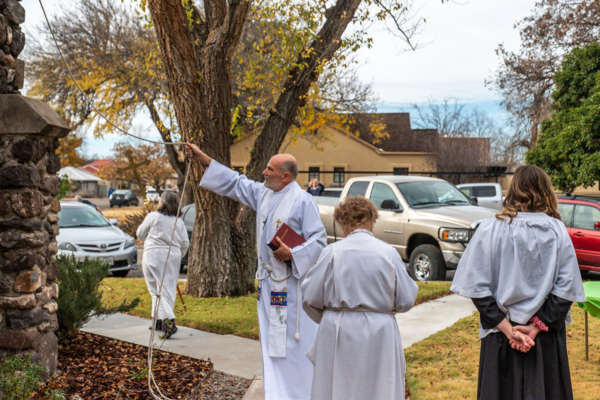 During his sermon before the meal, the Rev. Mike Wallens, St. Paul’s vicar, traced the complicated origins of Thanksgiving, beginning in 1621 up until President Abraham Lincoln declared it a federal holiday in November 1863, when the nation was in turmoil and in the middle of the Civil War.

“The country [was] literally falling apart” and Lincoln’s political career was in question, said Wallens, which he followed up by asking, “What was this man who apparently had little to be thankful for – what was he thinking?”

As the nation again finds itself in turmoil, citing disagreements over how to handle immigration, endless wars, self-serving leadership, “we are here to give thanks, and by giving thanks, we are reminded of how blessed we are,” said Wallens, who asked those present to reflect on what they’re thankful for.

Following the service, Shere Whitley, a member of St. Paul’s who moved to Marfa from Houston in the late 1990s, expressed gratitude for her two sons “who are healthy and happy” and live nearby. 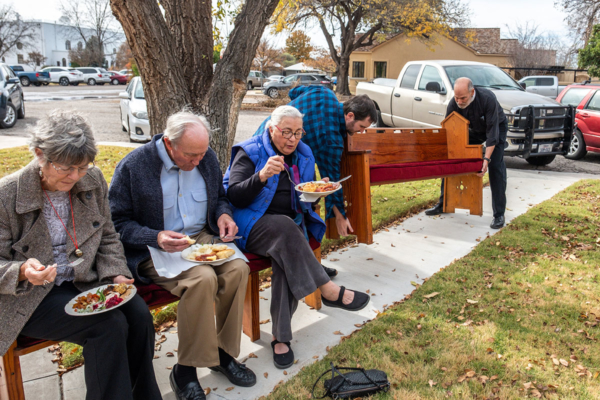 Teenager Ella Wonsowski, who serves as an acolyte at St. Paul’s and lives in Alpine, 26 miles east along Highway 90, gave thanks for St. Paul’s congregation, saying, “The people are just really nice, and you don’t find a lot of people this caring.”

“I’m thankful for family, of course, but also those who keep the doors open, and Mike Wallens, who has brought St. Paul’s to the community,” said Scott, when asked what she was thankful for. Wallens, she said, is very involved, reading to elementary school children and attending city council meetings, for example. “To me, he has this way of, ‘here I am, I am God’s hands and feet, and I am here to serve you.’” 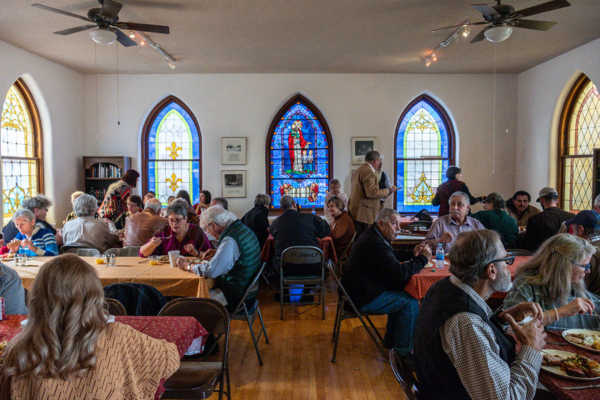 Marfa has one blinking red traffic light at the intersection of Highland and Highway 90. The majority of residents are Hispanic, plus a mix of artists and cattle ranchers, many of them descendants of the town’s settlers. There are nine churches, ranging from Presbyterian, Roman Catholic, United Methodist and a Spanish-language Baptist church to the nondenominational Faith Alive Cowboy Church, in addition to St. Paul’s, which attracts parishioners from Presidio, Jeff Davis and Brewster counties.

Chicago-born Wallens, who has served in urban parishes, is grateful to live in the Big Bend region, the name given to the area in West Texas north of the Rio Grande.

“I’m thankful for this place, for this whole area. I mean, the Big Bend, and this church in particular, and the people here, they’re just lovely and giving and kind, and I just love it,” he said. “And we don’t have traffic. … The big traffic jam is when there are five cars at the four-way stop.”

– Lynette Wilson is a reporter and managing editor of Episcopal News Service.